Shiro Miyata (宮田 司郎, Miyata Shirō?) is a major character in Forbidden Siren. He is a doctor who owns the Miyata Clinic, and the twin of Kei Makino, both of whom were raised by different families.

Born in 1976 before the earthquake Hanuda as Katsuaki Yoshimura. He grew up in the Miyata family, separated from his brother, Takaaki Yoshimura, and was renamed Shiro Miyata. Growing up, he studied to become a doctor.

At some point, he and Kei Makino knew that they were twins, though as they got older their relationship remains frosty, as they were brought up by different parents. From his time as a member of the Miyata family, Shiro becomes cold and indifferent to others, not showing much emotion compared to his brother.

Some days before the ritual, Shiro appears at Kei’s church and hands him a letter from the Kajiros before leaving.

He also has a relationship with a nurse working at his hospital, Mina Onda. During their relationship, Mina admits to being pregnant with his child. Upon hearing this, Shiro strangles Mina to death and taking advantage of the ritual goes to the woods in Janokubi to hide her body. While he is buryng Mina the siren (Datatsushi’s call) renders Shiro unconscious and Mina's goes out taking his shovel.

The doctor awakens several hours later, and is horrified to find that Mina’s grave is dug up – but from the look of it, it seems that it is dug from the inside. Not knowing what is going on, Shiro manages to escape the area while tricking the Shibito inhabiting the area in order to sneak past them, during his escape, he comes across Mina’s shoe.

Later, he bumps into Risa Onda, Mina’s twin sister, but is unaware of his connection to Mina. They decide to go to the Clinic for shelter. Along the way he discovers Kyoya Suda’s I.D. card.

The two make their way back to the Miyata Clinic, once they arrive Risa sees Mina through a window, they both stay together until Kei suddenly appears, and Risa is surprised that she and Mina were not the only pair of twins in the village. Then Risa goes off in search for her sister while the two brothers talk, after a while she manages to activate the fire alarm making the brothers realize that she is in danger.

Kei is unable to ward off a Shibito-resurrected Mina, but Shiro’s quick timing saves the two, throwing acid onto her. Shiro reassures his brother that he’s not used to these kinds of situations, and decides that he must hunt down Mina personally.

Despite hours of searching the clinic, he has difficulty finding her. As he stares out of a window in one of the clinic’s rooms, Risa enters, acting unlike her usual self, her skin color different and her movements trance-like. She calls out to him while wearing a nurse outfit, making her resemble her sister. Noticing her odd actions, Shiro mistakes her for Mina before quickly realising that this isn’t her.

Manically, he proceeds to strangle her like Mina before, stating that "You really are twins. You even look the same in death." She dies from strangulation, but immediately transforms into a Shibito due to her psychic connection with her sister.

Shiro escapes her and eventually confronts Mina in a secret underground compartment of the clinic. While in this area, he inspects Miyako Kajiro – a person from 1976 who was the ‘sacrificial lamb’ for the ritual that occurred back in the 1976 and relative to the Miyako Kajiro of 2003. Miyako, holding the Uryen – mythical and powerful objects – offers them to Shiro, who takes them.

Having defeated the Onda sisters, he proceeds to perform an autopsy on them to figure out if there was a possible way to kill the Shibito. His results show that Shibito can never be destroyed – even dismemberment is ineffective. Kei enters the autopsy room when he hears the Onda sisters’ screams. The two brothers face each other, and Shiro stomps on a small, moving fetus hidden in cloth – his and Mina's unborn child. He throws Kei a folder containing all of the notes he made on the Shibito, mockingly calling it "the secret to everlasting life". Kei, disturbed by his brother’s actions, runs away in fear.

During Day 2, Shiro comes across an unconscious Yoriko Anno and Kyoya Suda. He takes the two back to the Clinic, giving Yoriko blood from Kyoya. Yoriko wakes up and saw Shiro, who cryptically reveals to her that he saved them before leaving her. Yoriko, not knowing what he is talking about, assumes that he is drunk.

In the late hours of Day 2, Shiro and Kei cross paths again. Shiro admits that, despite being a doctor, he has always been jealous of Kei’s status as a priest, rhetorically asking, "Do you know what it’s like to be inferior to your own double?" Kei apologizes, saying that he didn’t know how Shiro felt. Shiro says that his "part" is done, and takes out a gun, which he aims at his own head. Saying goodbye to his brother, he pulls the trigger – only doing so when he aims it at Kei at the last second. With the death of his brother, Shiro takes his clothes and assumes Kei’s identity.

After the ritual occurred, Shiro finds Kyoya and hands him the shield Uryen statue – he tells him "That’s your role, isn’t it?" and that he should erase everything in this alternate dimension. Kyoya knows that "Kei" is acting strange, but does not think much of it.

Trying to fulfill his own way of saving Hanuda, Shiro defeats a Shibito Brain with Fly Shibito Akira Shimura in a settlement. He manages to find some explosives below a well and takes them. Near the end of his journey, he is forced to confront Risa and Mina Onda one last time in the mine-shafts. He first stakes Risa in the chest, making her unable to move. To ensure that Mina did not pester him any further, he places the explosives in the mines, and detonates them, knocking out Mina – her role as a Shibito Brain renders every other Shibito near the mines to collapse.

He finally made it to a large red sea, and discovers the lost souls of people who refuse to submit to the siren’s call, leading them to become degenerated, rotting corpse-like Shibito. Frightened and disturbed that "everlasting life means everlasting pain", he uses the sword Uryen statue to grant his wish – to sacrifice his own life to end the suffering of the Failed Shibito. As the Uryen burns his arm and opens up a gigantic hole in the ground, the Failed Shibito are sent into it, and the souls of the Onda sisters greet Shiro. Smiling, he willingly falls into the hole, having served his purpose in freeing the lost souls of Hanuda.

Throughout most of the game, Shiro is depicted as cold and calculating. He is amoral, examples including killing Mina when he knew she is pregnant with their child, and dissecting the Onda sisters just so he can see if they can be killed despite the screams and pain they endured.

His relationship with Kei acts as an important unveiling of his character. He is jealous of Kei’s position as a priest, so much so that he is willing to kill him so that he can adopt his identity. In his final two levels, he is disguised as Kei – in the game’s level select screen, these levels are listed as Kei’s instead of Shiro’s. While initially making the player think that it is actually Kei who they’re playing as, it could highlight Shiro’s thoughts about himself and Kei. He pointed out how different a set of identical twins can be – two people with the same appearance but different minds. The act of taking his brother’s identity served as a ‘fusion’ of the twins; Kei’s clothing, hairstyle and cross, combined with Shiro’s mind, bravery to fight off Shibito, and Shiro’s reaction to finding out the eternal pain the Failed Shibito feel is reminiscent to Kei’s reaction to Shiro’s dissection of the Onda sisters. This way, Kei’s death can be "symbolic" – it allows Shiro to "become" Kei and get rid of his jealousy towards him, while making both brothers feel one, with Shiro’s mind and Kei's "body" (clothes).

This gives Shiro much character development – he starts out as amoral, then venting his frustration towards his brother, then "becoming" his brother, thereby killing his personal demons, and therefore attaining the will and sympathy of Kei, sacrificing himself to save the souls of others. He shifts from the grey side of morality into the light side.

Shiro views everything like it is a play, saying that his "part is done" before killing Kei and telling Kyoya that having the Uryen is "your job". Ironically, this dialogue feels as if he's aware of his role as a video game character, a subtle fourth wall break.

As Kei Makino, Shiro has the following missions: 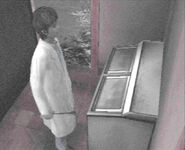 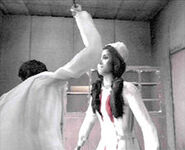 Shiro, dressed as Kei, in his last mission in the mines

Community content is available under CC-BY-SA unless otherwise noted.
Advertisement