Ichiko Yagura (矢倉 市子, Yagura Ichiko?) is a playable character in Forbidden Siren 2. She was aboard the Bright Win with her classmates, but a freak storm occurred, and Ichiko found herself to be the only living person left aboard the ship. Terrified and confused, Ichiko begins her role in the events of the game. Shigeru Fujita rescues her from the Shibito early in the game, but that doesn't mean they're safe.

Ichiko was a 14-year-old schoolgirl attending Kameishino Prefectural Middle School. In the year 1986, she was on-board the ferry Bright Win with her school's tennis club when the body of Yuri Kishida was discovered in the ocean and pulled on-board. The Bright Win is then lost in a freak tsunami caused by Yuri. During the storm, Ichiko fell overboard and drowned, only for her body to be taken as a host by Otoshigo, the father of Shiryo and Mother's mate.

In 2005, Ichiko regained consciousness in the hold of the Bright Win as the game's events begin to unfold and is rescued from the roaming shibito by

Shigeru Fujita. When the Siren sounds, she becomes completely possessed by Otoshigo and stabs Shigeru to death. Regaining her senses and horrified at what she has done, Ichiko stumbles around the island until she encounters Takeaki Misawa, who threatens to kill her. She is saved by Yorito Nagai.

At one point, she runs off and Yorito tries to find her. As Yorito finds her on the top floor of a building, she tries to shoot him with a submachine gun. She runs down and kills any enemies on her path. Despite Yorito giving her a bracelet to snap her out of insanity, Ichiko soon loses her mind completely and is never to be seen until the very end.

Ichiko—still possessed by Otoshigo, and equipped with a katana and submachine gun—encounters Mamoru Itsuki and Ikuko Kifune and races them to reach the top of the tower to catch Mother. The tower collapses and Ichiko falls all the way down but survives.

Ichiko is last seen in a clash with Yorito. By that moment, her face is swollen into a single eye and her body collapses and fully transformed into an enormous head with numerous asymmetrical legs. Yorito destroys her by tricking her into ramming a petroleum container and then setting her on fire with a light bulb powered by a nearby generator.

Ichiko's fate is similar to the stolen girl from "The Story Treasure Chest" archive file.

This is a story about what happened in a small coastal village in Japan during the war. There was a young girl who went to the beach to gather some seaweed. But never returned. The family desperately searched the area. But when they were unable to find her, they gave her up as a victim to the sea.

On the day of the girl's funeral, members of the family gathered at the front door where they heard a loud noise. There, they were shocked to see the missing girl standing outside the door with a blank expression on her face.

As the girl's relieved parents rushed to bring the girl into the house, the girl's elderly grandmother softly whispered, "No. It's not her." With those words, the girl melted away. All that was left behind was the clothes of the missing girl and a puddle of water.

The grandmother explained that the sea is the home of a monster that steals the appearance of the dead, and that the creature must not be welcomed into the home.

In the village, to this day, victims of drowning are never brought into the home. Instead they are cremated and laid to rest.

(just who was the girl they saw?!) -The Story Treasure Chest:special issue 1972, part 2, unbelievable!? strange phenomena from around the world:the stolen girl

This implies that the Ichiko who regained consciousness in 2005 is a clone created and controlled by Otoshigo after the real Ichiko died in 1986. 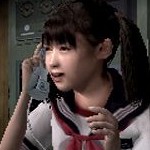