Harumi Yomoda (四方田 春海, Yomoda Harumi?) is a playable character in Forbidden Siren. A schoolgirl who was stargazing at the time of Hanuda's failed ritual in 2003, she had to rely on her teacher, Mrs. Takato for protection. She is the only survivor to return to the human world.

A 10-year-old schoolgirl who lost her parents when their car was struck by lightning. She has a daughter-mother relationship with her teacher Mrs. Reiko Takato, who lost her daughter when she drowned. The two were able to fill the other’s hole in their lives.

Harumi possesses a small degree of psychic power, able to experience ‘dreams’, when she documents in her diary how her parents appeared to her and told her to watch the stars. Just as well, her diary contains pictures of future events, specifically of the evolved forms of the shibito. She made friends with Miyako Kajiro, another psychic who knew what it felt like to be lonely. The pair decided to keep each other's secrets.

During Day 1, she and Mrs Takato took shelter in the school. The two managed to find a window that is boarded up. Harumi stayed near the window while Reiko discovers a crowbar, but is scared away by shibito and uses the school announcer to get help from Reiko. After being rescued from the shibito, primarily Principal Eiji Nagoshi, she accompanies her teacher in their escape from the school.

Later, in Day 2, Harumi tells Reiko about dreams that she’s been having, and that she and Miyako are ‘secret sisters’ – Harumi was told a secret by Miyako and was requested by her not to talk about it. She is asked by Reiko if she can be Reiko's daughter, since both of them view each-other as a surrogate family. Steadily, they come across a means of getting Harumi to safety without the means of fighting shibito – a cart that is being carried by a shibito. However, as the siren rings out, Harumi groaned when the cart she is in bumped, causing the group of shibito near the cart to corner her, but she is saved by the sacrifice of Reiko Takato, telling her to run as Reiko kills herself and the shibito around her with a gas truck explosion.

Harumi enters the Tabori house and hides in a closet. After some time, she realized that the Shibito-transformed Tomoko Maeda and her parents are now occupying the house. Using sightjacking to her advantage, she manages to steal a key to the balcony on the second floor, and sneak past Tomoko and her mother and father. Upon escaping the house, she moves down the steps that lead away from the settlement, only to encounter a Shibito Takato. Fortunately, Harumi is able to outrun her teacher and continues to journey through Hanuda.

Making her way to the Nest, she is scared when a woman appears in a corner and reveals her shibito nature to her up-close. After a long trek of sneaking and avoiding shibito, Harumi is able to rest against the outskirts of a building, unsure of what to do. Hours later, Kei Makino, a young priest, is heard walking towards Harumi. Not knowing that he is a fellow human and instead mistaking him a shibito, she hides inside the building to not be seen.

At the end of the game, when Datatsushi is killed by Kyoya, Harumi is about to be attacked by Shibito Brain Principal Nagoshi, but is saved by the timely arrival of Reiko Takato, sacrificing herself once more to protect Harumi. Due to her blood not coming into contact with any of the red water in Hanuda, she is sent back into the real Hanuda and reality, crying in the midst of the town’s ruins, all alone.

During the fourth day she is rescued by the Japanese Ground Self-Defence Force. Her rescuer, Takeaki Misawa, held onto her while the two were being sent into a helicopter as part of the rescue operation. Misawa senses the physic force of Hanuda, which scares him before being drawn back to his senses by the voice of the operation’s pilot. This would later affect his mental health afterwards.

A newspaper article in Forbidden Siren’s Archives notes of her rescue three days after the landslide.

As a result of the experience in Hanuda, Takeaki Misawa suffers from dreams and hallucinations over the next two years, including seeing Harumi. This would lead him to take medical pills in order to remain mentally healthy. Harumi is seen in Forbidden Siren 2 in a nightmare Misawa has; he is in a room, hearing a telephone ringing before hearing something shuffling in a door. As he checks the door, nothing is there, only for there to be the silent, mud-covered figure of Harumi standing behind him. Misawa wakes up from his nightmare before he can see her.

The next time he sees her, he has taken hallucinogenic drugs, under the belief that they are his medication. With his psychic powers, mental health and hallucinations brought on from the latter and the drug, Misawa becomes incredibly unstable. He searches an apartment, only to find Harumi crying in a corner. He places his hand on her, only for her to turn around and reveal a shibito-like monstrous face, and then attacks him. It is unknown whether this hallucination of her affected his current state any more than the drugs and his health.

Harumi, being a young child, is naturally scared of the shibito and the other possible horrors of the town, and therefore she feels safe when in the company of Reiko Takato. She sees Reiko as not only a teacher but as a mother figure, and feels lost without her following her sacrifice to keep her safe from oncoming shibito.

However, Harumi’s reliance of Reiko for safety does not mean that she is unable to do anything without her; while trapped inside the Tabori house, she is able to stealthily sneak around the house without getting caught, and manages to outwit the shibito in the Nest by hiding and using items like a loud laughing toy to distract them, thus showing that she can survive through wit and patience. 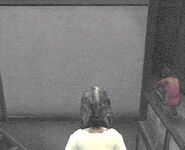 Harumi in the Tabori house, with Shibito Tomoko Maeda near her

Harumi in the Nest 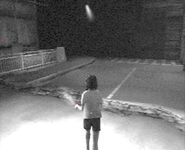 Harumi exploring the Nest in Day 3

Harumi's drawing of Miyako and Kereb

Photo taken on a school trip to Gojaku Peak
Community content is available under CC-BY-SA unless otherwise noted.
Advertisement